Yeah, this place is pretty much dead. 8D

Most of the stuff I do gets sent to buddies via email/text/dA note. Not much sense posting it here too. (Unless anyone out there wants me to put up everything I've done since the last entry.)

I guess that "eh" feeling I've had for awhile is permanent.

For now, I'll keep the blog up but may delete it in the future.

Happy trails, all!
~Meshia
Posted by Meshia at 11:43 PM No comments:

It's springtime, which is supposedly a time of new beginnings. Maybe I can complete something this year?

I've begun my senshi ref sheets, after how many years? 8D Here's an attempt at Archy: 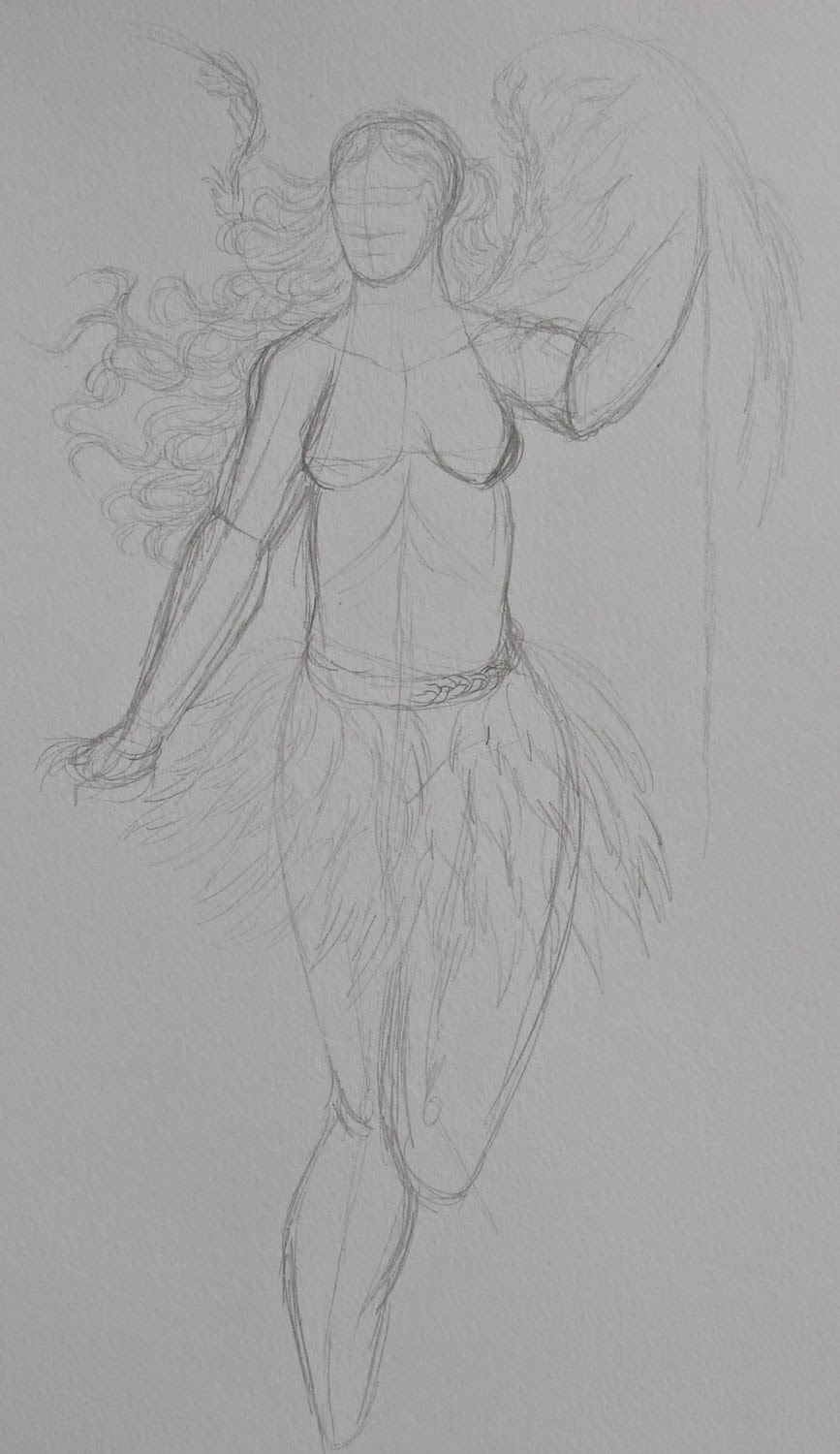 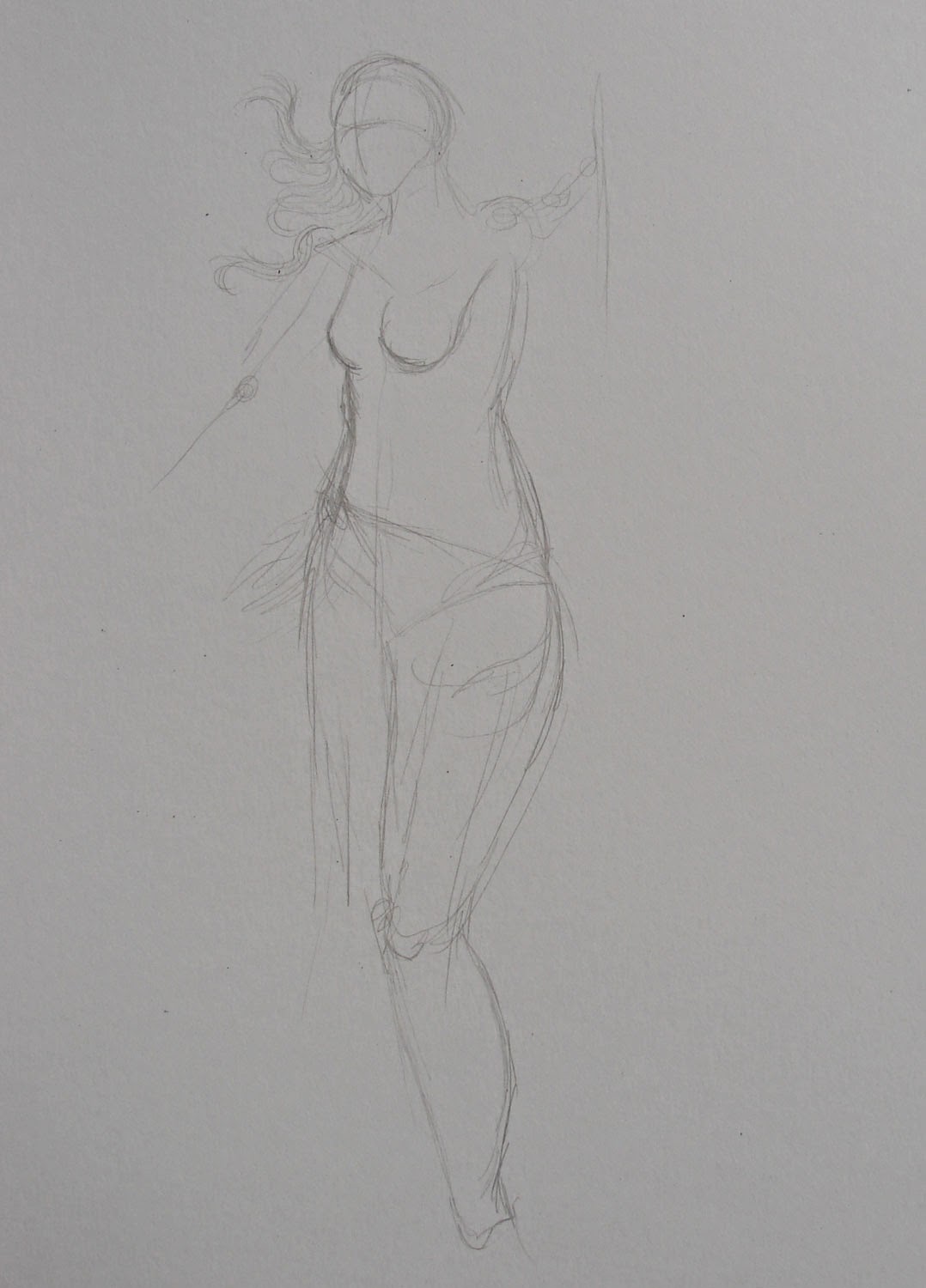 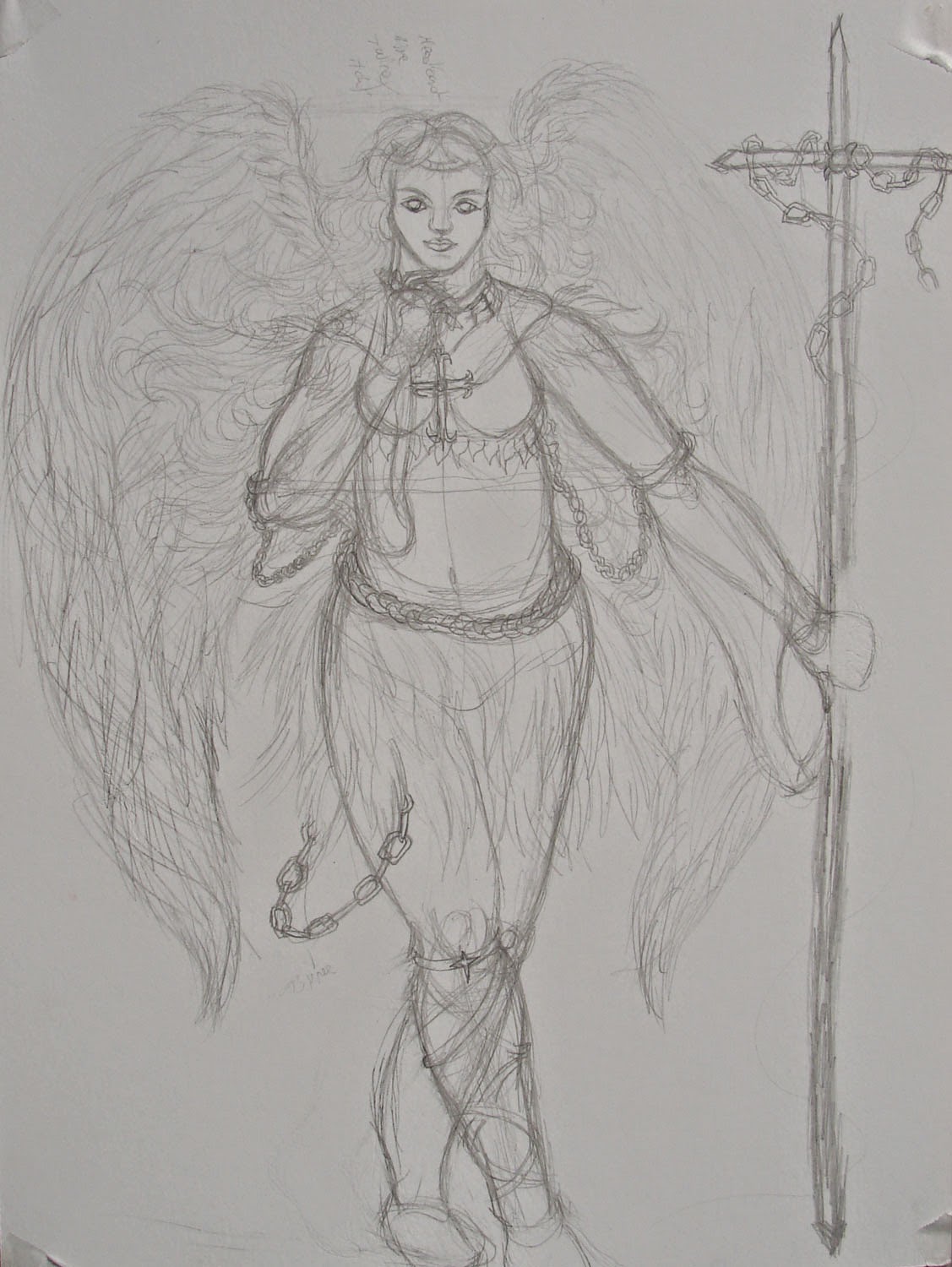 WILL scrap it. 8D Not having good luck here with Archy, am I?

Some details for Archy. Still need to work on faces in profile, hmmmm. 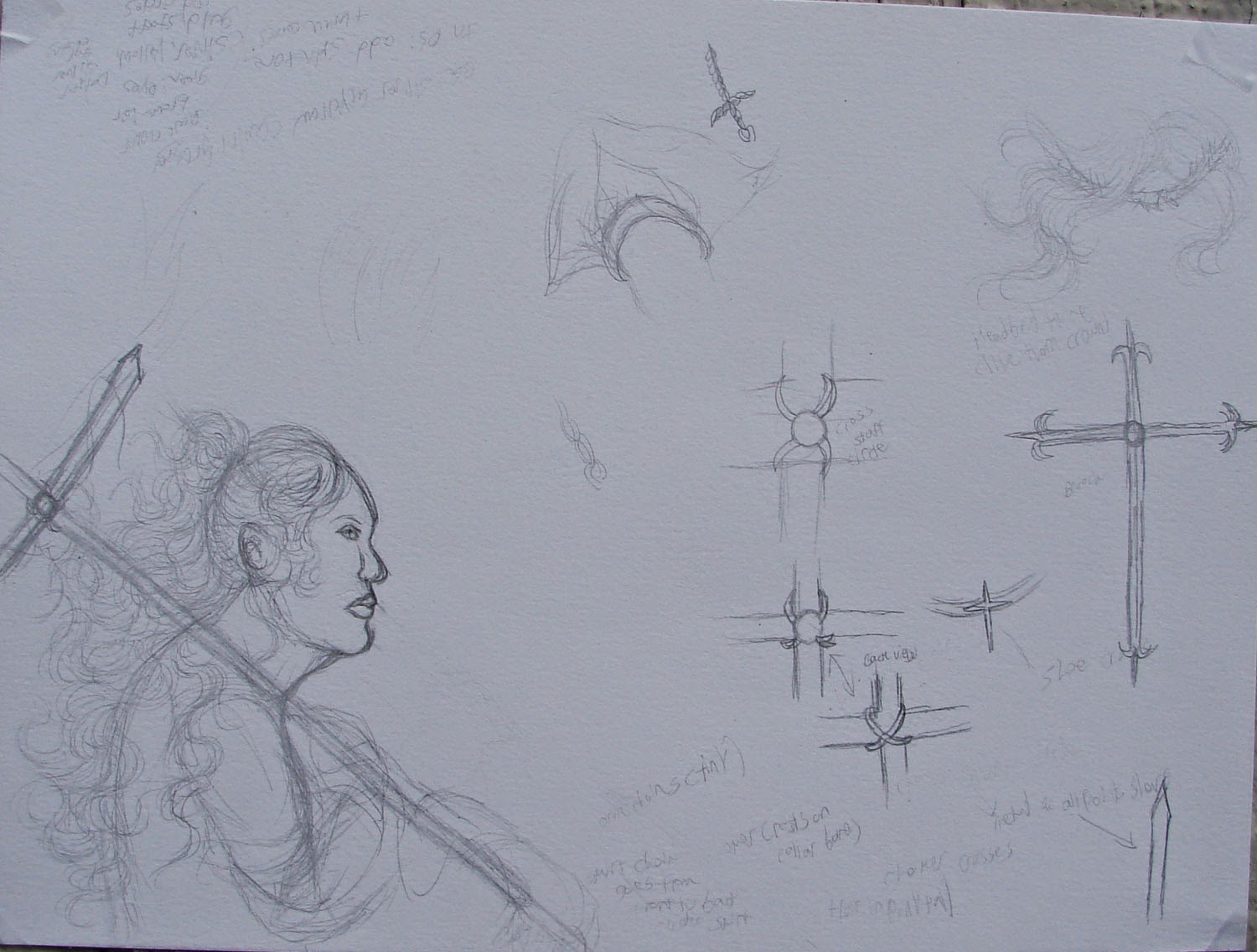 Here's Dunamis' base body. I want to keep it but will have to draw the rest of her legs and feet, and outfit details, on the back of the Bristol to save sheets. Stuff's expensive! 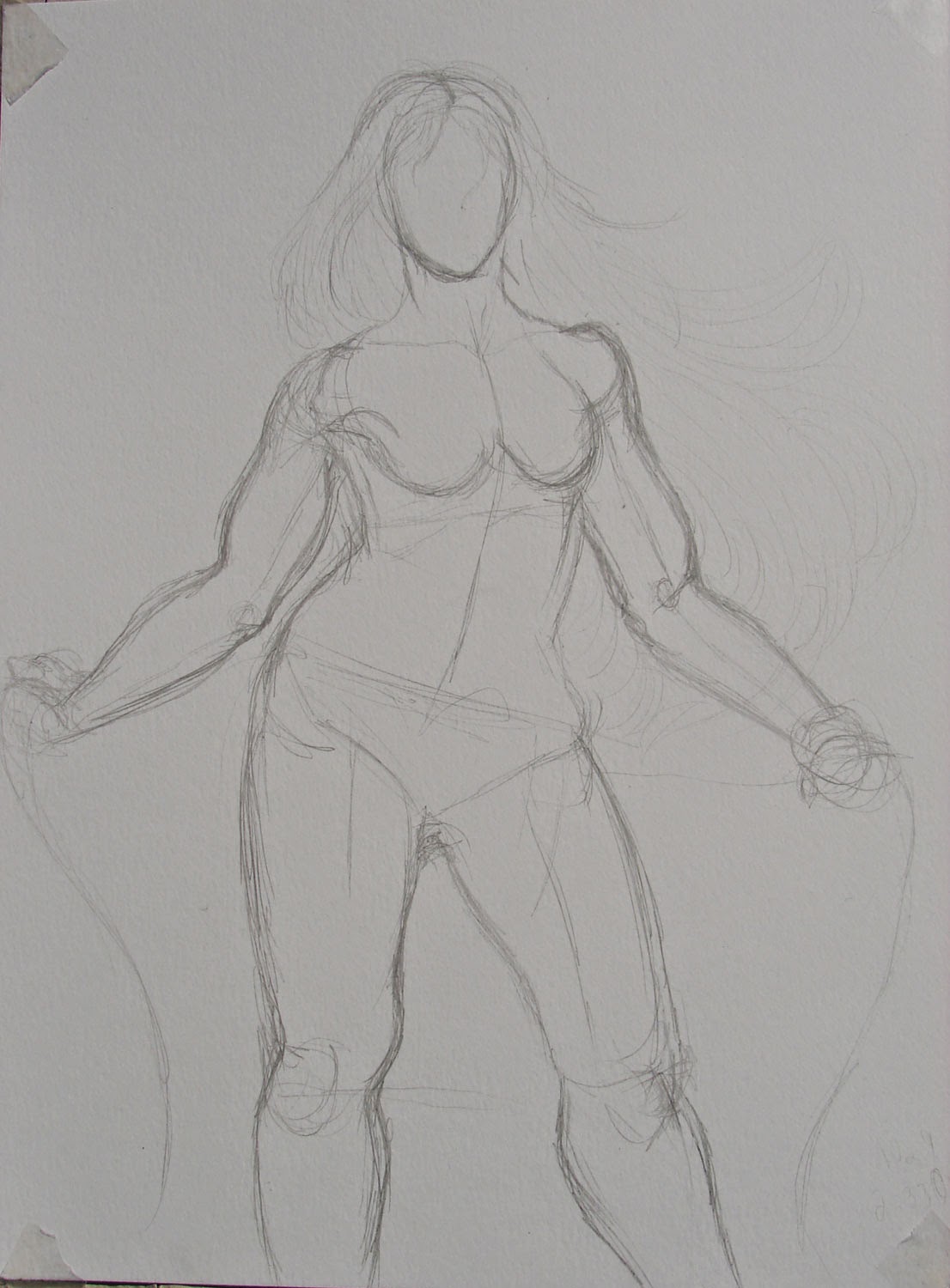 Sailor Asclepius is next. Same situation as Dunamis: need to complete the feet and outfit details on the back! 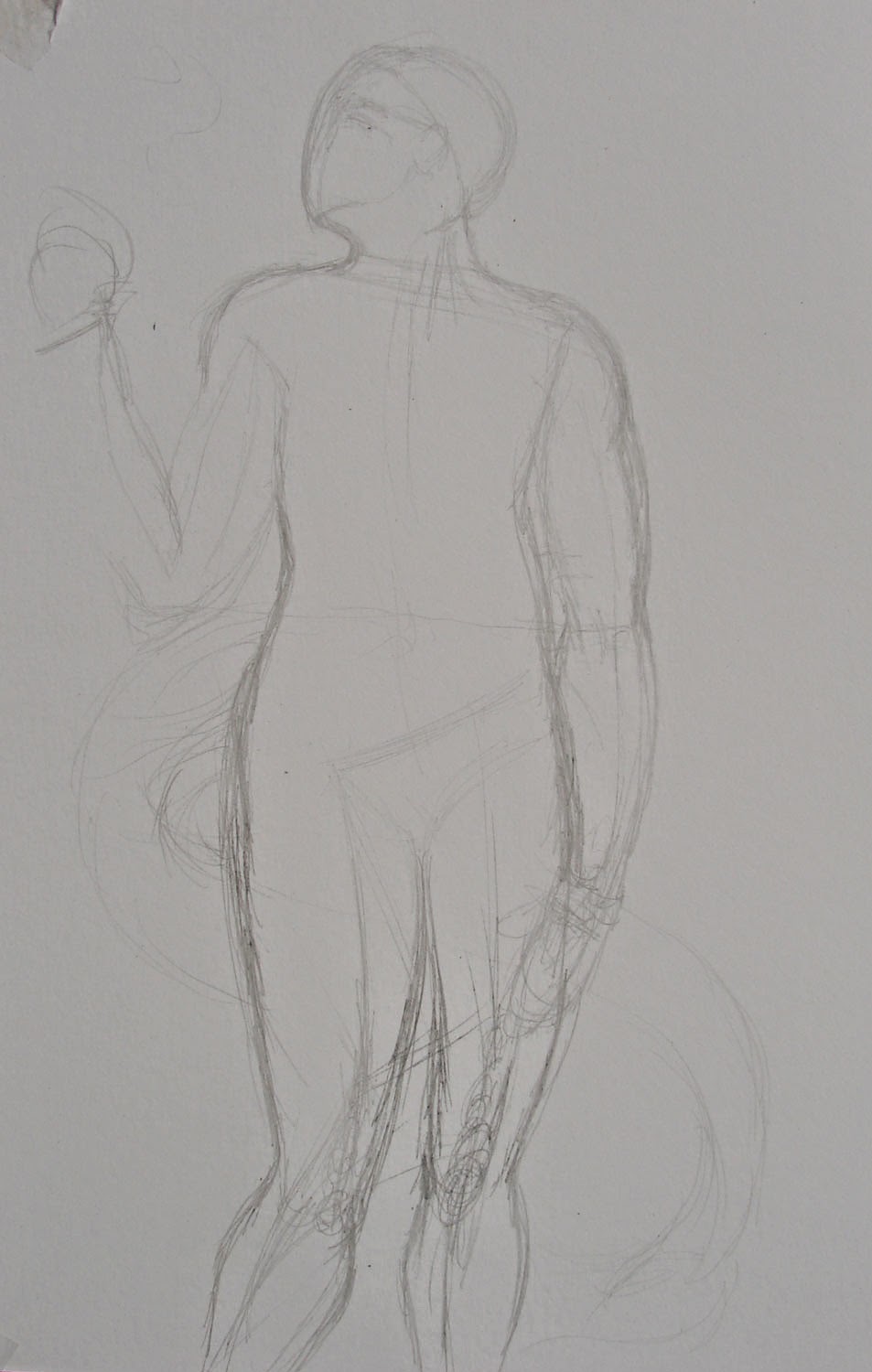 Sailor Seraphim has quite a lot of details on her sketch. Looking at it now though, it bugs me. So it may be scrapped. D: 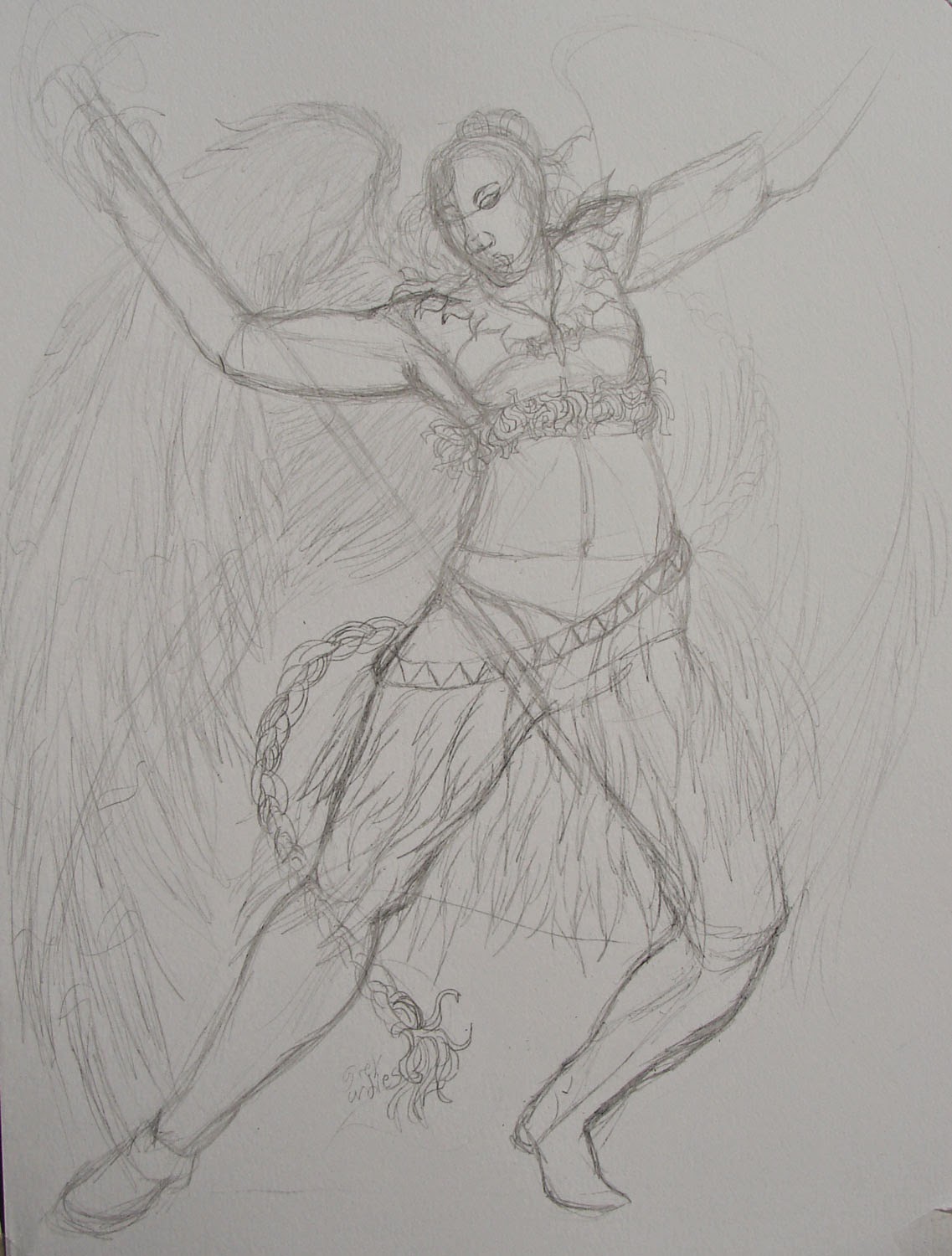 Sailor Garuda! Her right (our left) arm and hand seem massive. Or is it just me? 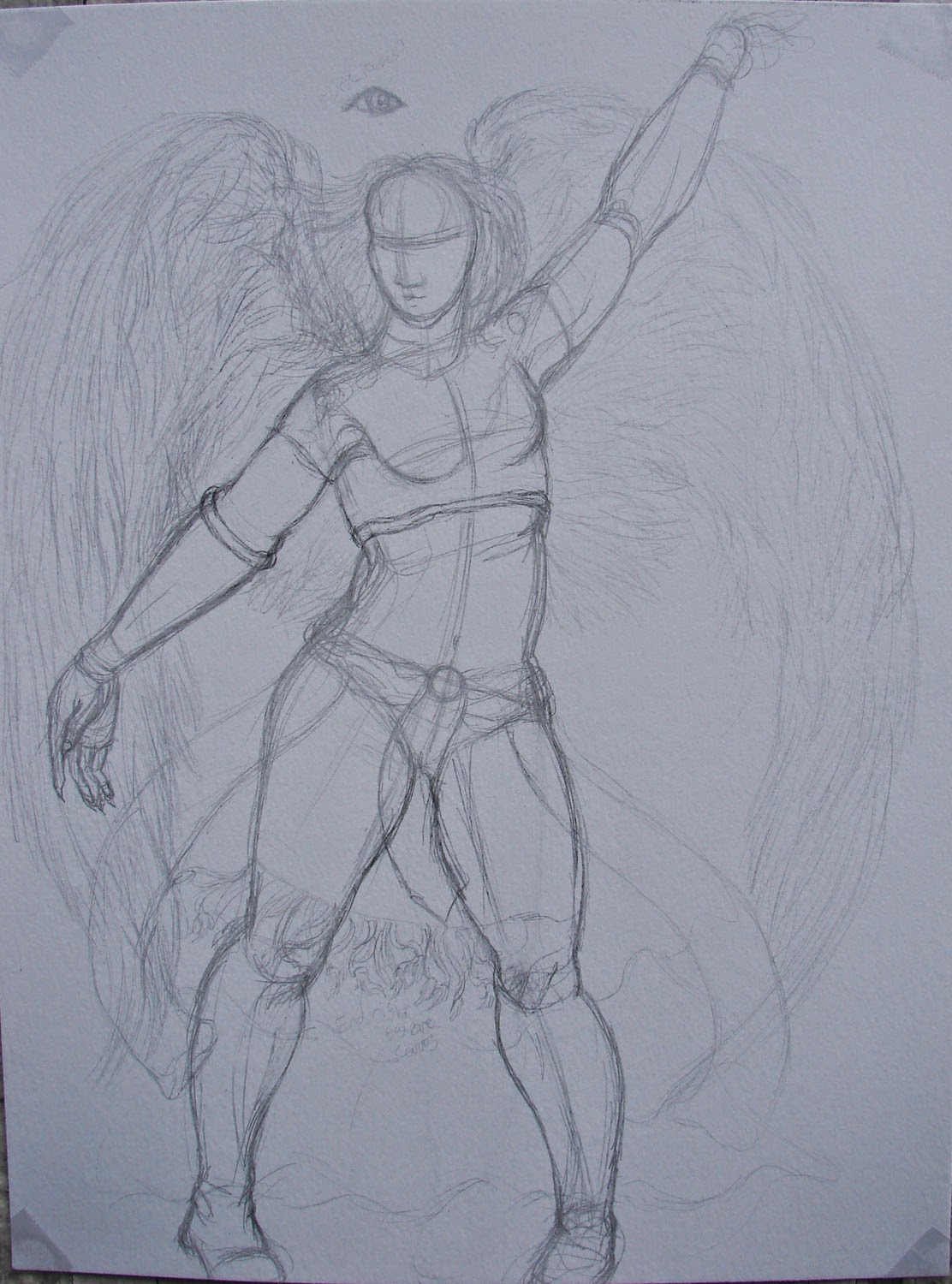 Restarting my clothing meme for City Guardian Senshi. (Cloe/Marginis, shown below and Nehanda/Honoris) 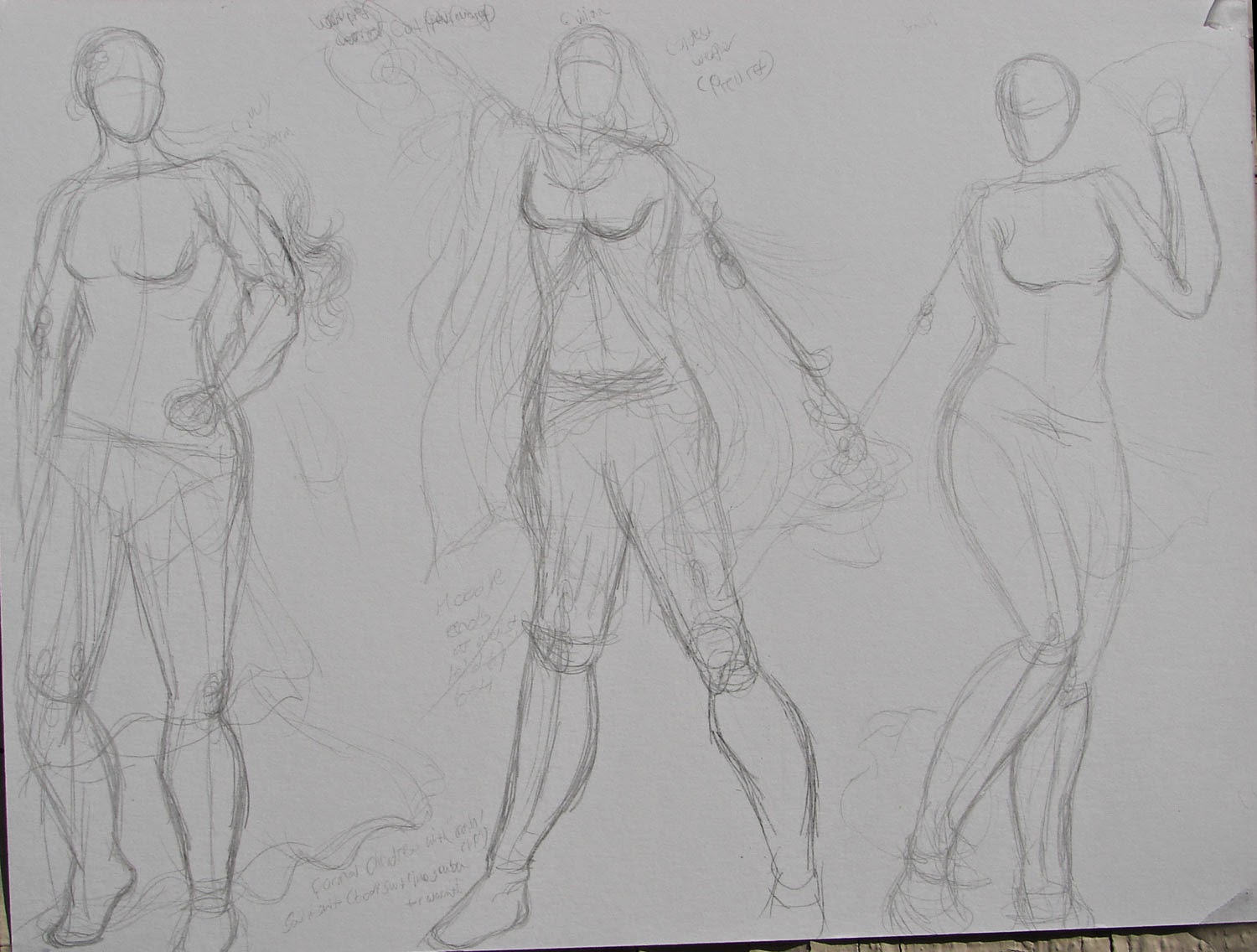 A couple of sketches for the FaLLEN art contest! The first is meant to be an indeterminate-gendered Arma, whose features are leaf-like, since the story uses symbolism of fall/autumn, leaves, and maybe redemption from a "fallen" state? 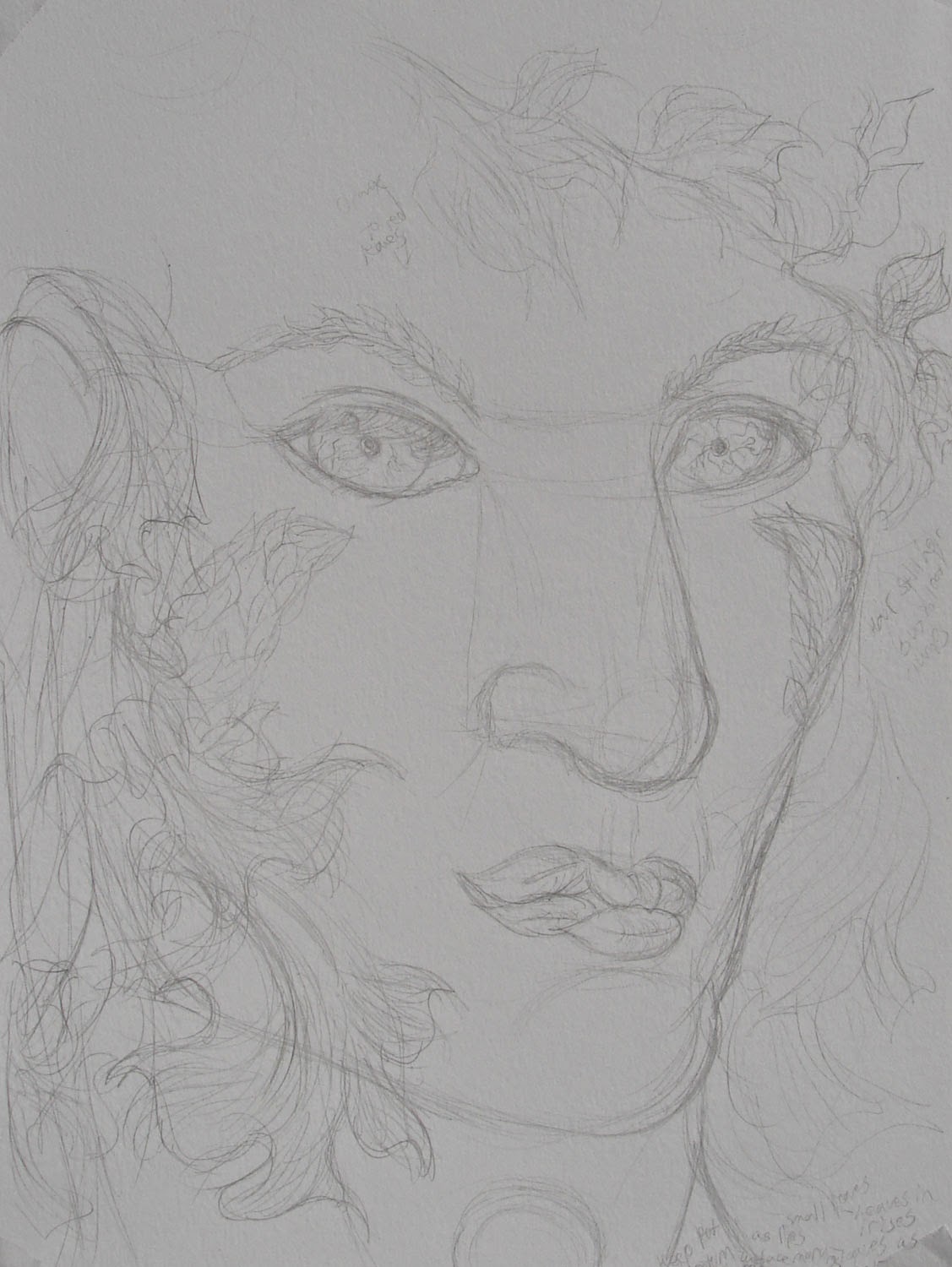 This one may be a bit spoilery for those who haven't been through Ogawa Burukku's dA gallery. I modeled "Munchkin" off calm and sacred images of the Virgin Mary, but her curly hair has Arma within its grasp. I just think her plans/interest for Arma are a bit malicious. But I'm not sure! 8D 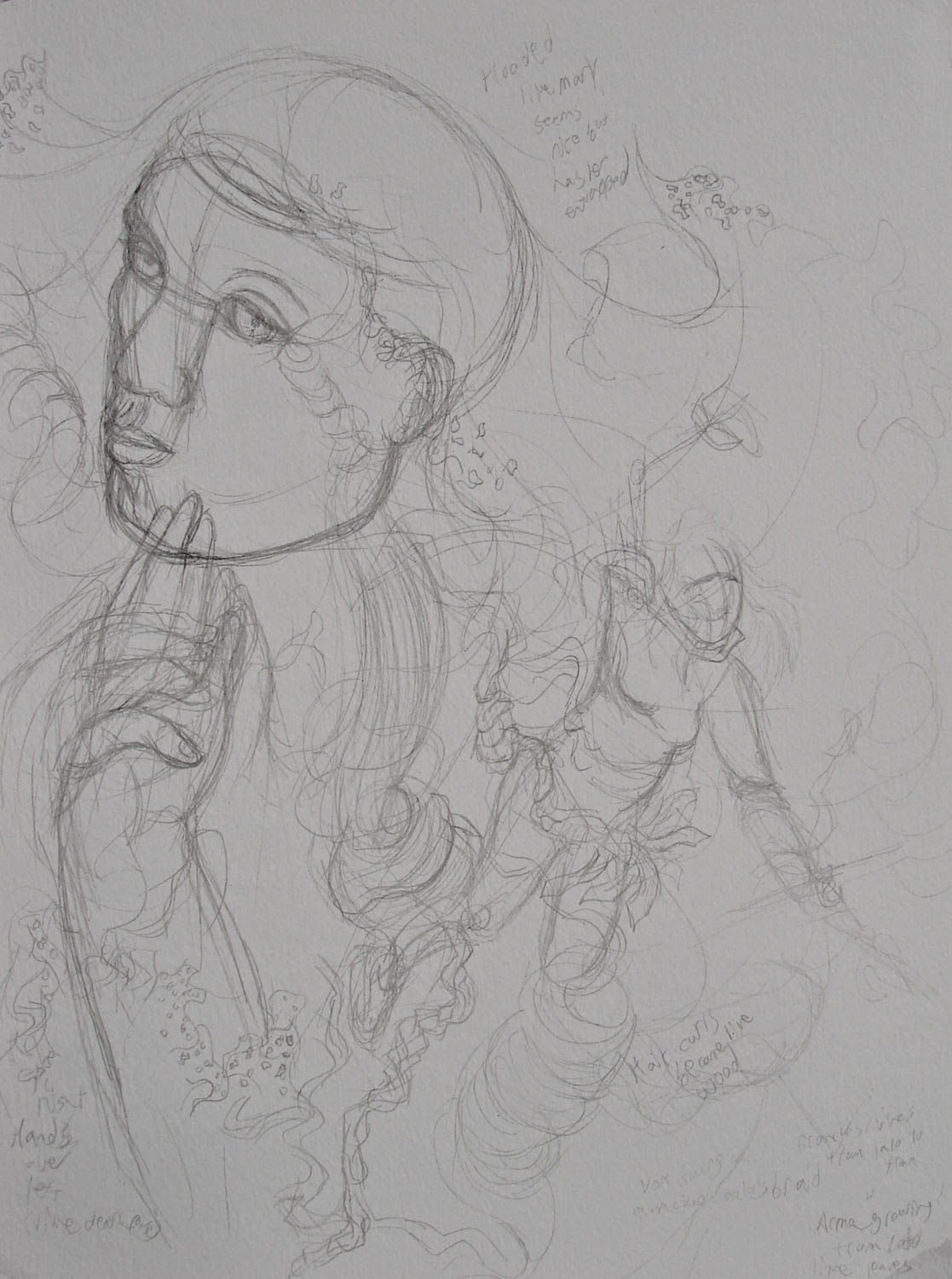 Last time, I said I'd post some sketches. Those actually made it to my Deviantart account instead.

First up is a WIP for Dezi. It will feature her Sailor Nisaba saving my Sailor Borges from the Librarian. It does make sense if you know the whole story, but only Dezi and I know the details. 8D
I'll be adding the Librarian herself and the details on the book and characters when I can! 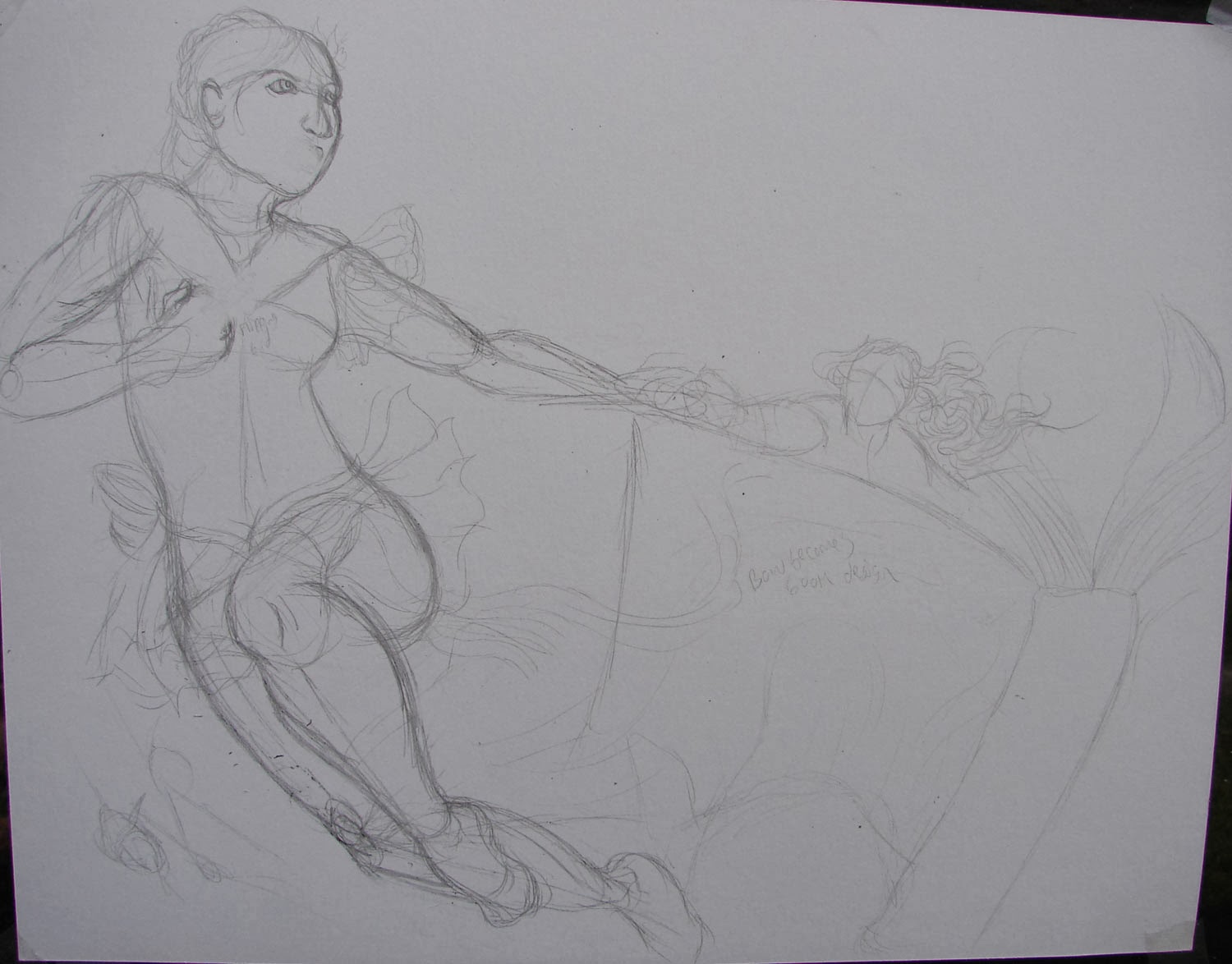 Next up is a WIP for Gabi's shipping contest. I chose my Garuda and her Bismuth Macaw because they're both based on birds and I had a cute idea of songbirds being all lovey-dovey/flirty in a cage. >.> It's probably not what Gabi wants since I don't think these two have a "spark" portrayed here. I just hope I finish it in time since it's gonna be a doozy and very detailed with all of the those lotus petals and Bismuth crystal.

Wow. I really didn't post anything in 2013. I wasn't completely idle, so this kind of surprises me.

This past year, I let go of some people, offline. I've realized it's time to move on and just focus on my own goals and let those others live, and not hang onto them.(Some have already let go of me.) That can be poisonous for all involved. I've erased lots of contacts in my phone, e-mail, and blogs, except for a select few who I have gabbed with recently. (This includes you, Derrot! Don't worry. I'll keep bugging you because why not? :P) I bid everyone else farewell and prosperous lives. <3

I can feel the Reaper getting closer these cold nights. I can only imagine that Foxy will be visiting his twilit island within a year or two. Or it could be something unexpected. I'll just have to bear it. ;_;

I'm currently working on several things at once:

-Secret for Aya (this thing will NOT let me go. XD)

-A character profile and image for a competition (Sailor Borges)- Profile stuff ready to type and organize; beginning image

-A written piece for my Grim series

-Picking up a short/mini comic collab again with Jadine

-Images(official), and four designs, for the Angelic Senshi, but these are way down the list for now.

I may take photos of some WIPs and post them tomorrow to add some new and much-needed  graphics to this blog. For those who are still interested in this thing, thank you for sticking with me. I hope you like what's coming.   :)

(Also: I'm still jobless, but will be volunteering at my local zoo . It's their 100th anniversary this year, so I may be there a lot. Hopefully, this will open doors for me in animal/humane/veterinary assistant paths. We shall see!)

Posted by Meshia at 2:10 AM No comments:

Continuing sketches for my Senshi Series, starting with the Angelics (and finishing/re-designing the remaining four: Hasmallim, Malakim, Cheribum, Ophanim)!

I liked this a lot yesterday when I sketched it. Looking at it now with fresh eyes, eh, not so much. Do the proportions look completely out of whack to anyone else? I need to change the perspective of the right arm to make it look like it's coming towards the viewer, and fix the left arm. I know that. But what about the rest? Start over?

Pose referenced from the Senshistock To Go book. (AGH! I want those packs, but don't have the money! *collapses*) 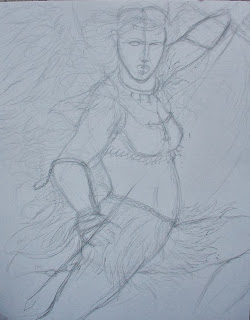 Posted by Meshia at 4:28 PM No comments:

Ever since being terminated from my job, I've been a bit down. However, I'm slowly getting back into the groove of being (somewhat) productive.

I'm currently thumbnailing (is that even a word?) images of my senshi. I'm also getting the rest of my senshi designs completed so that people can finally see the whole team, if they're even interested. 8D

I started putting Sailor Garuda on Bristol, but I don't know if I like it. I kind of wanted to redo my first image of her, but not have it be the same. (WOW, that thing is OLD!) Since I originally imagined Garuda as being something of a messenger in that picture, I wanted to keep the "herald" movement. Does that make sense? >.> Like she's saying, "Hark!"("Hark" can also be used as a sound effect when someone is coughing up phlegm. *HarkharkHARKHACK*)
I took inspiration from the Archangel Gabriel in Annunciation paintings, but I don't think this pose has the punch I want. I wanted movement and maybe flying/flowing. But if I did that, she would go past the Bristol's borders and I don't want to draw her smaller since I want to color these and be able to get into the tiny details of the senshi outfits. D:
Do-over maybe? I shall see. But I want to get Archy, Seraphim, Dunamis, Heaven, Fenrir, Ascelpius, Principatus, Borges and others sketched in their own images soon. 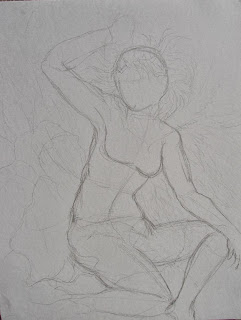 Next up is my WIP of Lara Jean Chorostecki as Freddie Lounds. I thought about doing this in colored pencils, but figured that I need to get used to "regular" portraits before doing something so ambitious. I still want to use colored pencils for Freddie, because of those delicious red ringlets. So, next time!

Haven't done much on her yet, but I'm determined to get her skin done soon so that I can continue that hair! *drool* 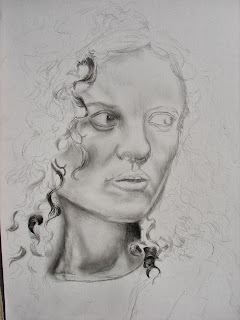 And here's a picture of Foxy with her new big bone. With me bugging her. She's not happy about the latter. She's a grumpy old fart. :P 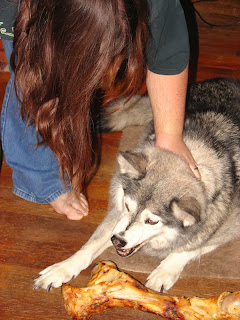 
First is the lovely Mads Mikkelsen as the good Dr. Lecter, done with Faber-Castell graphite on 11x14in. Bristol. (No flash. I kept getting a big glare when I had it on) 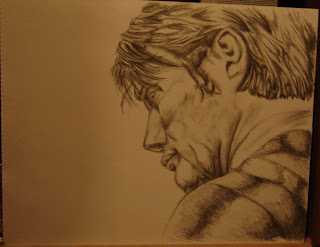 Thank you to Derrot for encouraging me to not give up. <3 I may fiddle with this some more before putting it on dA. I could shade the thing completely, but I don't want to to risk screwing it up, especially since it's my first decent "portrait" in awhile. Just kept it simple (with mistakes, but hey. It's okay!). I'll probably do a lot more shading on the next drawing of him. :3

Currently blocking in another pic of him. Same actor, different, um, character? Eh, it's from some sort of photoshoot. I just really like his look and the crown he wears in the photo. (It'll make sense later.) Very Game of Thrones.
I already see mistakes, but I'll fix them. I'm still measuring the facial features. This is gonna be a real difficult one, but you'll keep my spirits up, right, Der/peeps? 8D 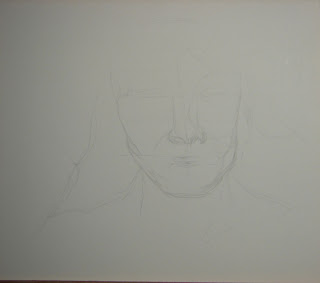 I'll probably end up drawing more of him because I adore his bone structure. >.>


Blocking-in of Lara Jean Chorostecki as Freddie Lounds (done very lightly). Haven't decided if this will be another regular graphite portrait or if I'll attempt colored pencil. She has some delicious red curls and I just want to capture them. YUM!
More sharp cheekbones to play with! YAY! 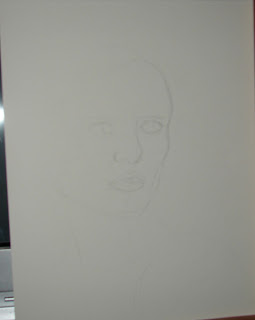 And another WIP of Roz. 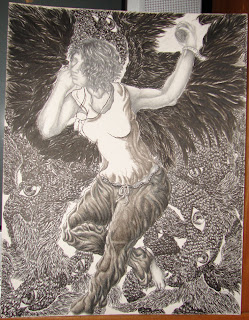 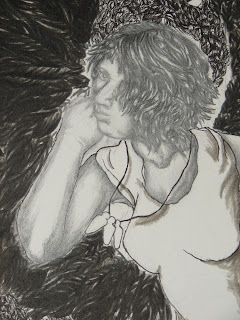 Close-up of hand and pomegranate 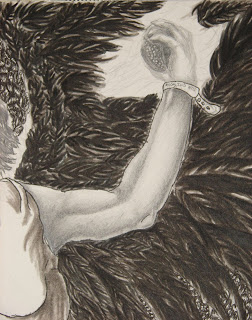 Also, before I forget: here's that Geico owl commercial, Der!